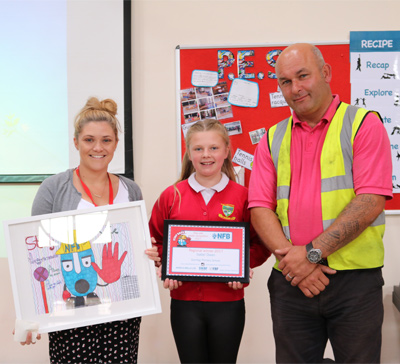 Whilst working at Garnteg Primary School, a pupil innocently entered the site to retrieve a ball that went over the fence. Our site manager on the project, Jason Morris, engaged with the pupil and explained the dangers of entering a building site. The pupil in question then sent a letter to Jason to say thank you, including a colouring of a digger. After this incident, a presentation was given to the whole school during assembly, emphasising the dangers of unauthorised entry onto building sites. It involved getting the pupils to list what they thought were the potential dangers, and asking volunteers to dress up in hard hats, Hi-Viz vests, ear defenders, goggles and dust masks. As the pupils were young in age, this was the best way to engage them. We also encouraged the older pupils in the school to take part in the NFB Stay Safe Campaign, resulting in a regional winner from the school (Pictured).